75% of the fund allocated by AFM for renewable energy, lost

Acasă >> Public policies and measures for the energy transition >> 75% of the fund allocated by AFM for renewable energy, lost

The Environmental Fund administration managed to distribute to the population only 25% of the funds it had available for the promotion of renewable energy and energy efficiency in the period 2009-2021. An analysis of Bankwatch Romania raises a red flag on the administration’s ability to solve and financially support the applications for the installation of renewable heating and electricity production systems.

In the report, attention is drawn to the fact that the administration spent only RON 563 million of the total allocated sum of RON 3.3 billion in the period 2009-2022. Moreover, out of 140,000 applicants, individuals and public institutions, between 46,000-60,000 had their files approved by May 2022. If all the citizens who applied had received funding, then we could have replaced 5.5% of polluting energy, with a reduction of 477,000 tons of CO2. 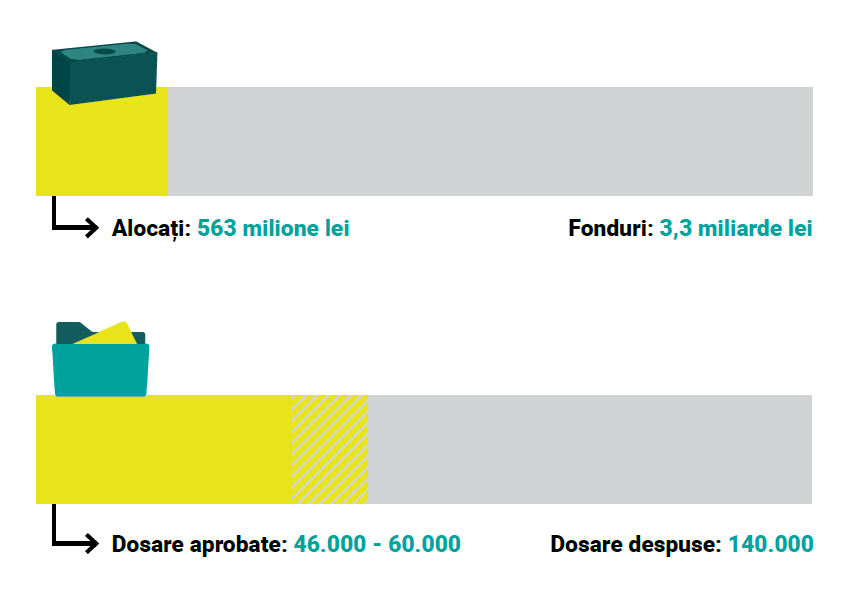 “Romania needs a more efficient administration. We need now functional programs to promote local energy production and energy efficiency, especially since a reduction in the price of energy is more than necessary, and photovoltaic panels can be a lifeline for both the citizen and the state,” said Laura Nazare, coordinator of the energy transition campaign at Bankwatch Romania.

The main goal of these programs is to reduce carbon emissions and increase renewable energy capacity, but these indicators are not tracked by the administration.

According to the NGO’s calculations, if all 46,000 citizens had managed to install a 3 kw photovoltaic system, the energy produced by them would have replaced 1.8% of the energy produced from coal, the most polluting fuel, and would have saved 156,000 tons of carbon emissions. If all citizens who applied would had received funding, then we could have replaced 5.5% of polluting energy, with a reduction of 477,000 tonnes of CO2.

At the moment, however, it is not known how many of the citizens with approved files have managed to install their projects and settle the sums of money.

“We can only assume that those who have approved files managed to install their photovoltaic panels. But this is contradicted by the reality, where many citizens complain that they have waited 2 years to benefit from their own energy,” added Laura Nazare.

Bankwatch Association proposes a series of measures to streamline the implementation of AFM programs and to better measure results:

This project is implemented by Bankwatch Romania Association in partnership with 2Celsius Association and benefits from an EUR 244,000 grant from Active Citizens Fund Romania, a programme funded by Iceland, Liechtenstein and Norway through the EEA Grants 2014-2021. The content of this website does not necessarily reflect the official position of the EEA and Norway Grants 2014-2021. For more information, visit www.eeagrants.org.

Our site uses cookies to improve the user experience, personalize content, provide features for social networks, and analyze traffic. Click below to agree to the use of this technology.

This website uses cookies to improve your experience while you navigate through the website. Out of these, the cookies that are categorized as necessary are stored on your browser as they are essential for the working of basic functionalities of the website. We also use third-party cookies that help us analyze and understand how you use this website. These cookies will be stored in your browser only with your consent. You also have the option to opt-out of these cookies. But opting out of some of these cookies may affect your browsing experience.
SAVE & ACCEPT